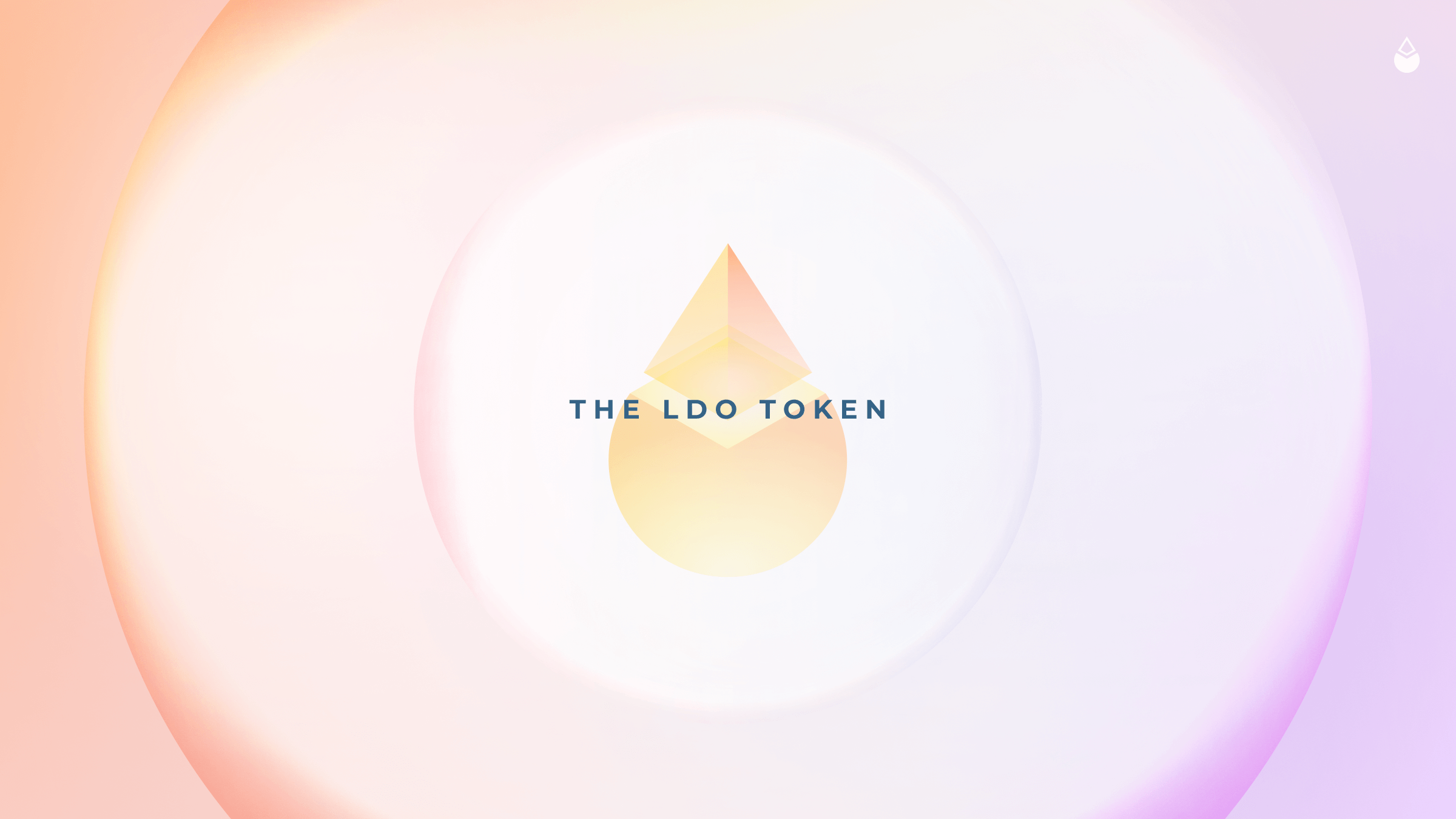 The LDO token governs all Lido DAO governance and network decisions to ensure its prolonged stability and decentralized decision-making to facilitate the growth of fair, trustless and transparent liquid staking.

The Lido DAO is pleased to announce the distribution of the LDO token - the Lido DAO governance token.

LDO has been distributed to early stakers across Lido. To check your balance, visit airdrop.lido.fi.

Lido’s Ethereum staking protocol has been built as a DAO to preserve Lido’s upgradability and stability whilst maintaining decentralised infrastructure. The Lido DAO governs a set of liquid staking protocols, deciding on Lido’s key parameters whilst spearheading Lido network upgrades. Members of the Lido DAO have the responsibility to govern Lido to maintain its ongoing efficiency and contribute to the overall growth of the Lido community.

There exist a number of reasons for why a DAO is the most optimal structure for Lido. Lido as a service is highly dependent on the development of the Ethereum beacon chain and its staking protocol. With a number of uncertainties surrounding the roll-out of Eth2.0, Lido is required to be upgradable. When faced with these uncertainties, the DAO-based governance approach will allow for Lido to remain flexible and adjust its staking service as necessary.

In addition to this, Lido’s design as a DAO will allow for the accumulation of service fees which can be managed and distributed transparently to cover development and insurance costs in a manner aligned with community interests.

With the mission to make staking simple, liquid, and decentralized for the end user, the Lido DAO has the following responsibilities:

It is our belief that a DAO is the optimal approach to launching Lido, balancing the benefits of full centralisation and decentralization to provide the most adaptable experience for users of Lido.

The Lido DAO is actively voting on a number of parameters, including the addition of node operators and the number of validators for each node operator. The votes can be tracked in real-time on mainnet.lido.fi.

Our mission with the Lido DAO is to distribute all decision-making to create a trustless staking service built around community-growth and self-sustainability. This is achieved through the LDO governance token. The launch of LDO is a significant step towards achieving this goal, driving decentralised ownership and facilitating development of a distributed, independent governance structure to lead the Lido DAO.

To have a vote in the Lido DAO, and to contribute to the determination of any of the topics outlined above, one must hold the LDO governance token. Holding LDO gives DAO members a vote in the future of Lido, allowing each DAO member to have a personal say in the community.

LDO voting weight is proportional to the amount of LDO a voter holds. The more LDO a user holds, the greater the decision-making power the voter gets. The exact mechanism of LDO voting can be upgraded just like the other DAO applications.

The LDO token will be used across all current and future DAO votes, giving every token holder a say in the direction and growth of the Lido DAO.

Upon the launch of the Lido DAO, 1 billion LDO tokens were minted.

At time of writing, founding members of the Lido DAO possess 64% of LDO tokens. These are locked for 1 year, after which they will be vested over 1 year. At the time of writing, the only unlocked LDO in existence are 0.4% airdrop distributed to early stakers and DAO treasury tokens. Anyone can make a proposal on how they can be used via research.lido.fi.

The allocation of these tokens is as follows:

With the recent proposal for LDO treasury diversification to institutional and angel investors, community members are asking about future LDO token distributions that will take place afterwards. This article post is for sake of clarity.

There is currently no concrete emission/release schedule for LDO tokens residing in the treasury fund. As per a previous article post, Lido intends to distribute the supply of LDO in the treasury fund to help fund ecosystem development where opportunities may arise. All of these distributions will be completely discussed transparently to the community beforehand, utilizing snapshot votes to probe sentiment.

* These numbers are updated on a weekly basis.

How do I get LDO?

LDO is available on a variety of exchanges such as Uniswap, SushiSwap, 1inch, DeversiFi, Hoo, Hotbit and Bilaxy.

There is currently no concrete emission/release schedule for LDO tokens residing in the treasury fund. As per a previous article post, Lido intends to distribute the supply of LDO in the treasury fund to help fund ecosystem development where opportunities may arise. All of these distributions will be completely discussed transparently to the community beforehand, utilizing snapshot votes to probe sentiment.

When will the LDO rewards on Curve end?

The rewards will continue until the 12th of May. The Curve rewards are voted on by the Lido DAO on a monthly basis. Expect a proposal and vote to continue rewards before the end of current rewards.

Can I stake LDO?

You currently cannot stake LDO. You can, however, provide LDO as liquidity in respective liquidity mining programs (eg. SushiSwap, 1inch).

What are the use cases for LDO?

The LDO token is the governance token for Lido DAO. It is used to vote on protocol parameters and govern the constantly growing Lido DAO treasury. You can learn more here: blog.lido.fi/introducing-ldo/

What is the LDO vesting period?

The tokens can be used for governance purposes but can’t move for one year from Dec 2020. In the year after that they will be unlocked and vested linearly on a per-block basis (so, in 1 year and 1 day about 0.3% of their total will be unlocked).

Why are transfers of LDO tokens more expensive than other ERC20 tokens?

LDO tokens cost more when transferring because it's a Minime ERC20 token - for its usage with the Aragon DAO features - which has a bit more expensive mechanics under the hood. It has to track the balance history to prevent "vote-transfer-vote again" exploit.

If you haven’t already, stake your Ethereum using Lido on stake.lido.fi.