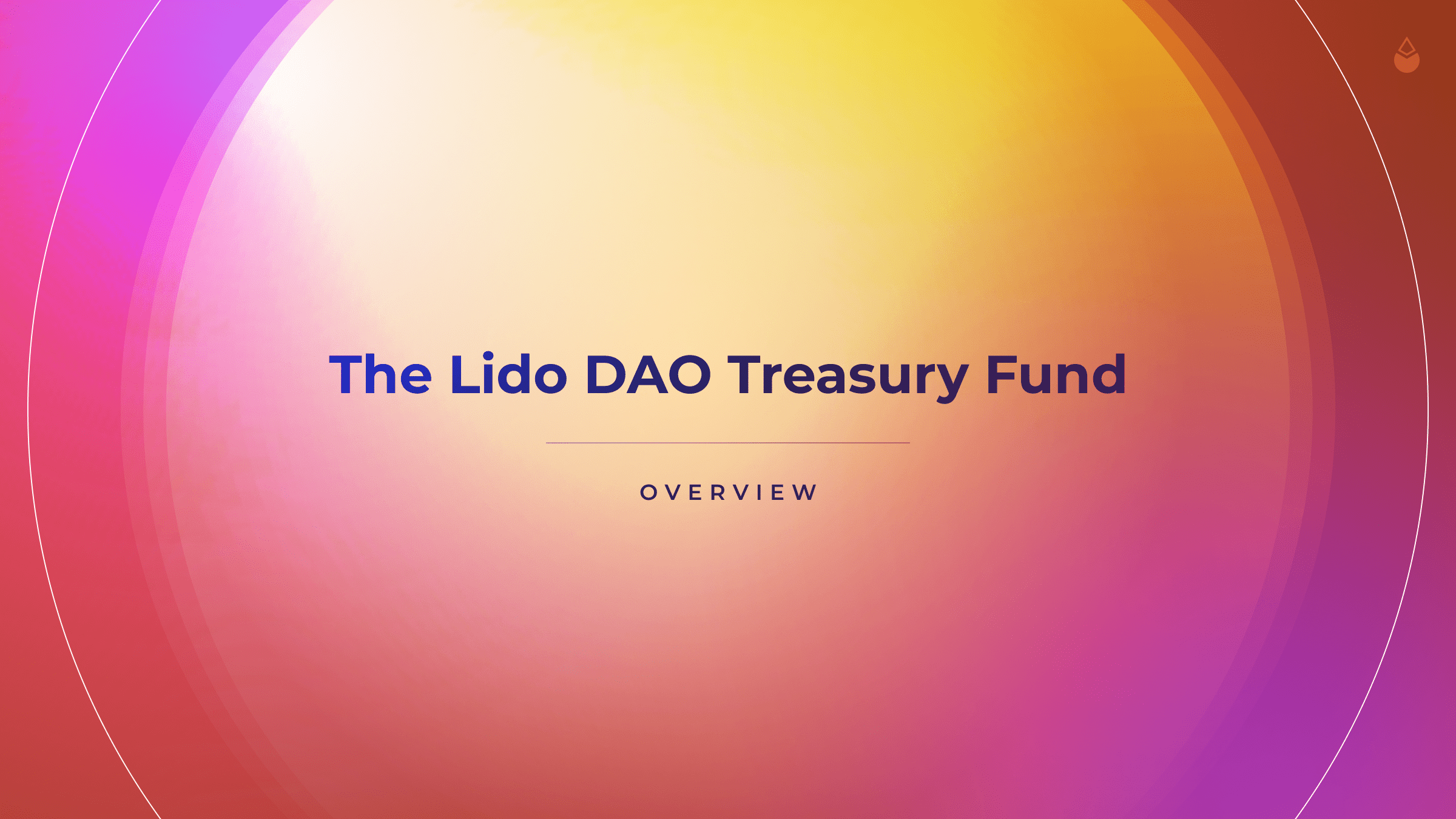 The Lido DAO is a community developing a liquid Ethereum staking solution for users to stake ETH and contribute to the security and stability of the Ethereum ecosystem.

Currently the Lido DAO has a treasury containing ~350,000,000 LDO - around 35% of the total LDO supply - which can be used for specific purposes to the benefit of the DAO.

The Lido DAO treasury fund intends to distribute its supply of LDO to use these funds to develop and upgrade the Lido protocol to solidify our position as the leading liquid staking solution. All LDO distributions will be discussed transparently through research.lido.fi, with Snapshot votes used to signal sentiment and subsequent DAO votes to cement distributions.

You can read more about LDO tokens and its intended use case here.

The purposes of the Lido DAO treasury fund are not fixed and are dependent on the direction suggested by the DAO community itself. Potential purposes span across a range of categories and include:

The Lido DAO treasury wallet can be tracked here.

In cases of slashing, users can rely on an insurance protocol to cover any losses of funds that were subject to slashing penalties. Eth2 implements slashing penalties as a way to prevent their network from being easily attacked, as well as to ensure validators are doing their task (proposing and certifying the next block in the chain).

Rewards and penalties are socialised, meaning that any slashing penalties that occur will reduce the overall reward rate for every Lido staker. Lido can utilize its insurance fund to purchase cover that will be able to reimburse users for the lost staked funds, thereby allowing everyone to get their advertised rate.

Lido can sell stETH and LDO in treasury or spend them directly to fund the purchase of cover for staked funds.

To help ensure the future of Lido, LDO can be used to pay for certain funds that helps the protocol strive. An example of those being: paying full-time and occasional contributors of Lido, and paying for future protocol development in the forms of audits, developers/coders, oracles, future node operators/validators, gas fees for contract deployments, etc.

We believe that LDO tokens should be rewarded to those who verily develop and push along the protocol to become something greater, allowing for the developers to have a voice in something that they helped build. This can take place in the forms of: coding, finding smart contract bugs, developing new programs that are beneficial to Lido (eg. dashboards), and the list goes on.

LDO can be provided unlocked or vested, determined by the specific kind of work, value alignment and the transferred amount. If the other party does not accept LDO (this is the case for some audit firms, for example), the DAO can sell LDO to fund these expenses.

Contributions also include Gitcoin grants for technical or documentational contributions which add to the Lido staking ecosystem.

Users are encouraged to research other protocols or chains where liquid staking with Lido can be applicable. A detailed inquiry can be shared to the forums where the user can explain the use-cases of the integration and how the two entities can work with one another.

Researchers are expected to publish their findings alongside information on the related protocol or chain. This inquiry does not necessarily need to be exclusive to DeFi and can expand to any cross-chain protocols.

A portion of LDO in the treasury can be allocated towards social marketing campaigns.

This is to spread awareness for the protocol and to teach those uninformed about Lido’s goals and future prospects. A variety of social marketing campaigns can be created, such as: interactive quizzes, contests, competitions, and more.

An example of a possible social marketing campaign to gain awareness is CoinMarketCap, where users learn about the protocol and afterwards answer a questionnaire related to the things they have recently learned about in order to win rewards.

Protocol fees can be siphoned from the Lido treasury to be directed to LDO token holders that vote in governance. This is to encourage users to actively vote and participate in governance to help ensure the future development of Lido through fair and non manipulative exploitations.

Currently as it stands, fees from stETH rebases are split between the treasury and the node operators/validators. A proposal explaining this mechanism as well as an explanation of the specific details it intends to implement (portion of the fees taken only from the Lido treasury) can be found here.

Users that provide liquidity to the supported liquidity mining pools can be rewarded with the DEX’s native token as well as LDO allocated from the treasury,

Liquidity mining events help to encourage the liquidity of stETH. This helps ensure the liquid aspect of stETH, allowing it to be freely exchanged/transferred and swapped on an exchange. Liquidity providers also benefit from the trading fees while still maintaining a somewhat lower level of impermanent loss due to the relationship between stETH and ETH.

An example of past liquidity mining events:

These developments can be manifested through unique protocol innovations, future protocol integrations with other parties, cross-chain liquid staking possibilities, or widespread adoption from cryptocurrency users.

For suggestions or proposals as to how to allocate the Lido DAO treasury fund, please submit a proposal using research.lido.fi.