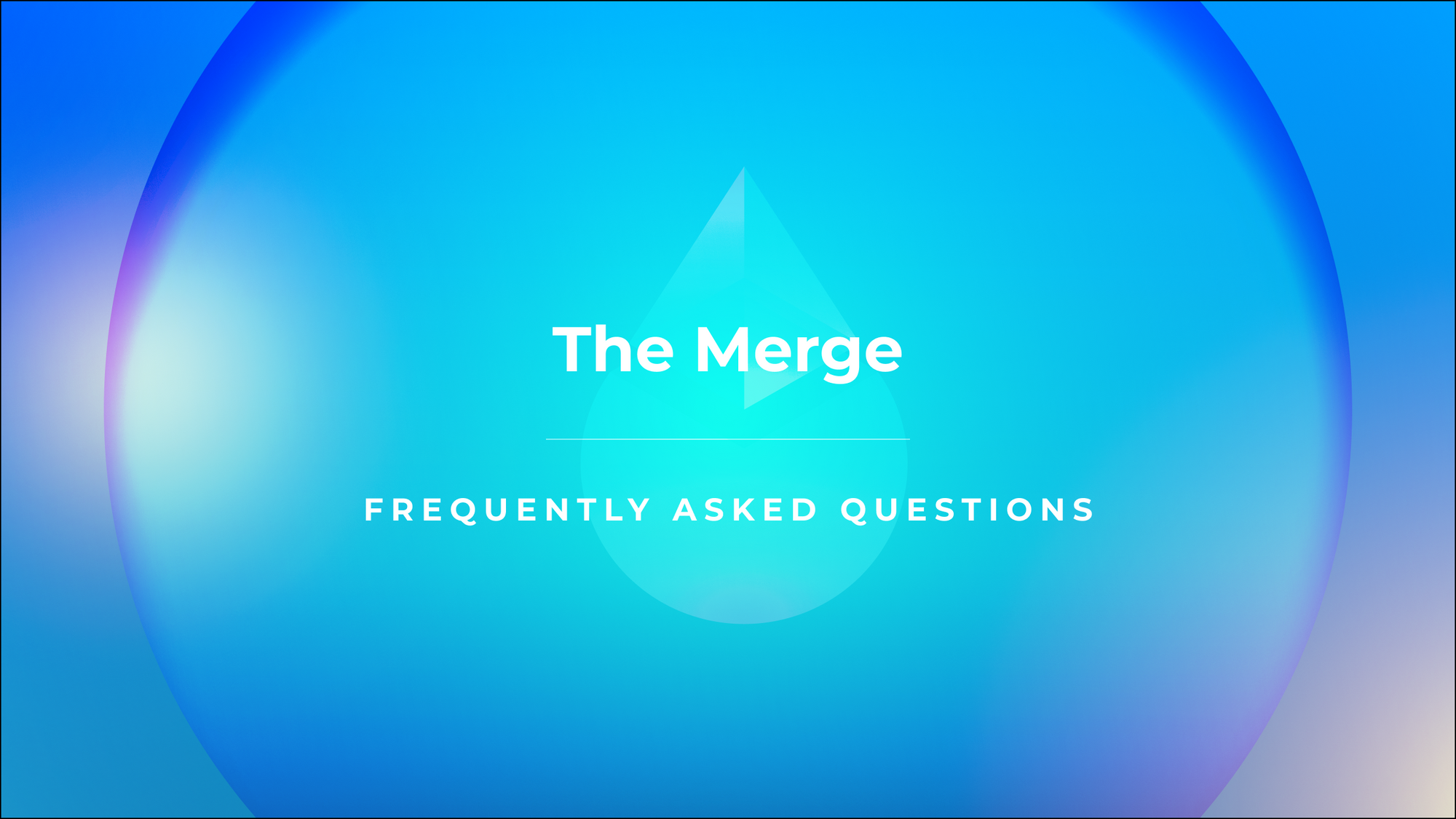 The Ethereum Merge is here!

What does the Merge mean? How does it impact ETH stakers? WHat does it mean for the Ethereum network as a whole?

Get up to speed with all things Merge-related below with an overview of the most frequently asked questions.

What is the Merge?

The Merge is an important milestone in the development of Ethereum. With the Merge, Proof-of-Work (PoW) Ethereum will migrate to become  Proof-of-Stake (PoS) Ethereum, and the PoW Consensus Layer mechanism will be shed in favor of the PoS one. You can learn more at ethereum.org/en/upgrades/merge.

When will the Merge take place?

Is it safe to stake during the Merge?

It is safe to stake during the Merge and Lido users will not be affected, with rewards continuing to accrue on a daily basis. Ethereum as a network will continue to function during the Merge transition, but there may be some drop in participation rate and some general bumpiness in the hours around the event itself.

What will happen after the Merge?

Following the Merge, Ethereum will transition from a Proof-of-Work (PoW) to a Proof-of-Stake (PoS) consensus mechanism. The most important effect of this transition is that mining will no longer have a place in Ethereum, as blocks in Proof of Stake are produced by validators. It is expected that the energy required to power the Ethereum blockchain will drop by over 99%.

What does the merge mean for stETH?

The merge does not affect ETH staked in the beacon chain which is still locked until a future upgrade on Ethereum. stETH will continue to exist and serve the same purpose it does now: act as an unlocked, liquid, and composable representation of the stake and staking rewards of nearly 100,000 users.

Will the Merge affect my staking rewards?

In PoS Ethereum after the Merge, validators will earn priority fees and potential MEV rewards. Both of these types of rewards will be staked by Lido validators to increase the stETH rewards available to users. As such, extra staking rewards will accrue to stakers post-merge resulting in an increased staking rewards.

Will I be able to unstake (/withdraw) after the Merge?

No, direct unstaking will not be possible until the hardfork after the Merge (codename Shanghai, estimated 6-12 months after the Merge). Stakers can still swap their stETH to ETH to effectively unstake using secondary markets (Curve, Uniswap) until then.

What do I need to do as an ETH holder?

Nothing - no changes are required and the Merge will not affect your tokens or balance. Take care of your positions if you are borrowing or lending ETH as rates may be a little volatile surrounding the event.

What do I need to do as an ETH staker?

How will the Merge affect Lido?

Lido will continue to exist as a liquid staking platform post-Merge and provide users with liquid and highly-accessible staked Ethereum. There will still be value in stETH as an integrated DeFi building block across Ethereum and allow for a variety of customizable staking strategies. Additionally, the Merge will result in a higher APR/staking rewards for active stakers. For more information, check out Lido and the Merge.

Lido has been built to be a core pillar of PoS Ethereum and as such has no plans to support ETH PoW. There have been no gov proposals to do so, so unless there is one, Lido will not support the distribution of ETH PoW tokens to stETH holders.

How will the merge affect ETH tokenomics? (i.e. emission rate/dilution, burn, etc - why does the merge make ETH potentially deflationary)

The Merge will impact the rate of issuance of Ethereum's native asset ETH. When combined with the previous EIP-1559 upgrade that introduced ETH's fee-burn mechanism, there is a higher probability that ETH's price will be positively impacted by The Merge in the long-term. That being said, this is contingent on growing network adoption, and multiple external factors.

PoS does not have the same proven track record as PoW, and some claim could introduce centralization and security risks associated with large capital pools acquiring large shares of the network stake.

What does the Merge mean for L2 and scaling solutions?

The Merge will not affect Ethereum's ability to scale. Ethereum will still rely on Layer 2 and alternative scaling solutions in order to make its decentralised applications more efficient and affordable to users. As a result, Layer 2s will be increasingly important to support Ethereum's growth and adoption.

Gas fees will not be impacted by The Merge. Future developments such as danksharding and proto-danksharding may help, but are not planned to be released in a proximate timeline.

Proof-of-Stake will issue blocks in 12s intervals, which is only slightly above the current Proof-of-Work average of 13-14s. This change is unlikely to be significant, and will not compete directly against the efficiency of other layer 1 rivals.

How will the Merge impact Ethereum's energy consumption?

According to the Ethereum Foundation, PoS is estimated to decrease Ethereum's energy consumption by 99.95%.

For more information related to the Merge, what it means and how it affects stakers, check out our article on Lido and The Merge.