Lido's stETH: Use cases in DeFi 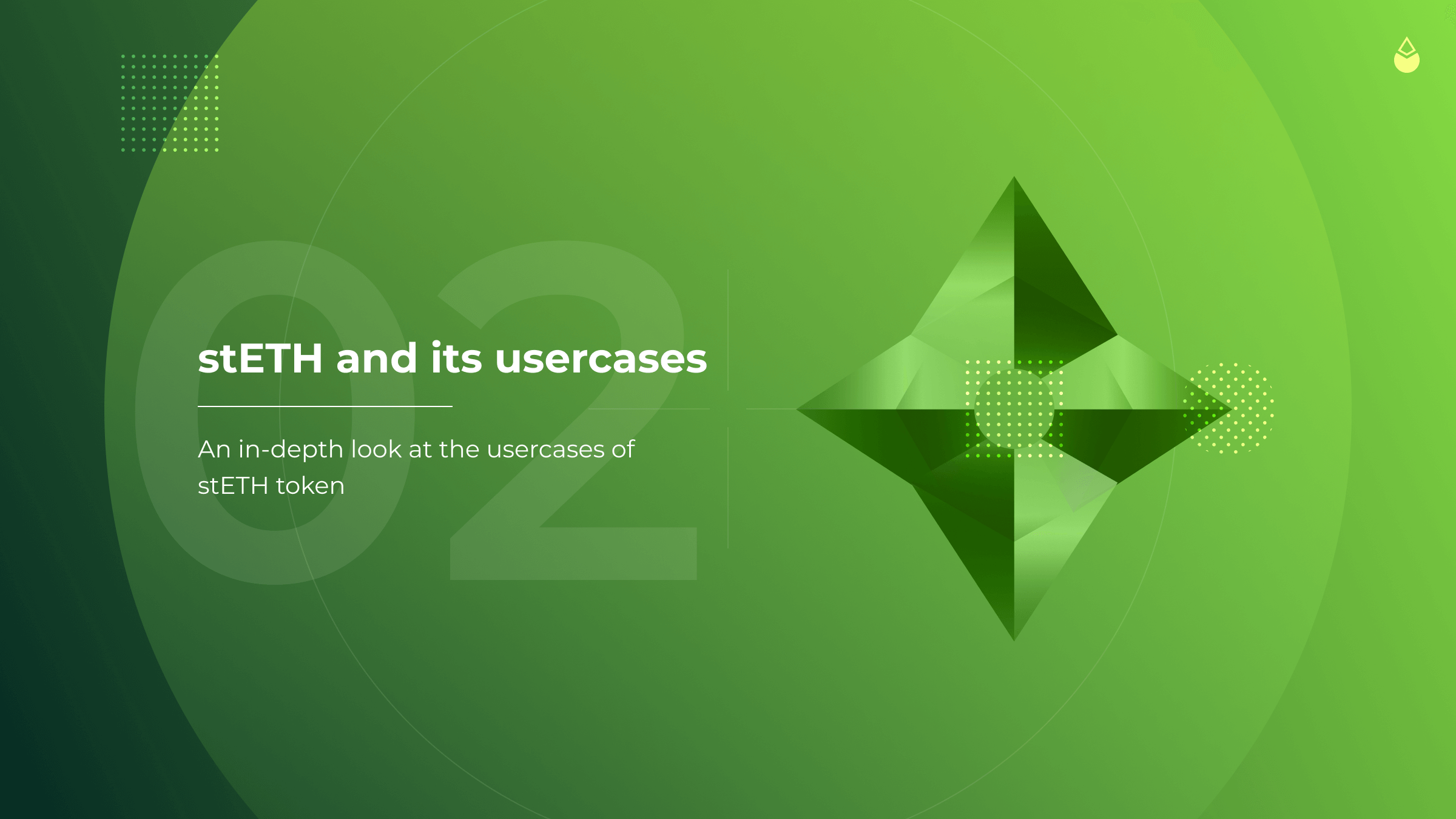 Part 2 in a 4-part series expanding on the fundamentals of Lido's stETH token. For part 1, check out 'The Mechanics of stETH'.

Interoperability and composability are amongst the strongest of pillars in DeFi along with decentralization and transparency.

To piece together separate protocols and to enable them to work with one another to accomplish a desired task through the utilization of innovative mechanisms is the ultimate goal of the platforms developed in this ecosystem.

Since the birth of DeFi, as well as its mass adoption through the cryptocurrency space, the user base has been exponentially increasing along with the development of protocols which seek to solve problems that hindered the past protocols that came before them.

Developed protocols can adopt these innovative mechanisms and modify or revise them to their specific protocol use case which in turn leads to the betterment of the greater DeFi ecosystem and signals to us the precursor of a new emerging ecosystem.

To understand the future of DeFi, you must first understand what is being developed in the current moment and how adaptation and revision of current mechanisms can benefit protocols mutually. So what is Lido developing?

Users can stake their ether with Lido, bypassing the restraints (illiquidity, immovability, and inaccessibility) from just staking in the Eth2 deposit contract directly. You can find more information about the mechanics of stETH here.

Lido’s stETH is fully intended to be used across a wide range of varying DeFi protocols where applicable. These use cases can range from lending protocols, DEX'es or liquidity pools, aggregators, optimizers, etc.

Below, we share more information about particular use cases where stETH can potentially be integrated.

Liquidity pools are collections of liquidity which consist of tokens which can be seamlessly exchanged with one another through the use of AMMs (automated market makers). Popular examples of platforms that use liquidity pool AMMs are Uniswap, Curve, and SushiSwap.

stETH can be pooled together with vanilla ETH in a liquidity pool. This in turn allows users to indirectly unstake their ETH and receive their initial ETH deposit back via pool swaps, bypassing the time required to wait for transactions on Eth2 to be enabled if a user decides that they would like to unstake.

Due to stETH’s relationship with vanilla ETH (users will be able to redeem an equivalent amount of ETH for stETH once transactions are enabled), we hope this will result in less impermanent loss for liquidity providers compared to other conventional liquidity pools - allowing for liquidity providers to gain trading fees without engaging in too much risk - as well as to help hold the peg between the two assets.

Liquidity pools are a primary structure in Lido’s ecosystem that helps maintain stETH as the liquid equivalent of vanilla ETH. Without liquidity pools, users will not be able to unstake until transactions are enabled, breaking a core aspect of Lido’s manifesto.

There are ongoing liquidity mining programs that are occurring with stETH and LDO. You can read more information about them here:

Lending protocols can adopt stETH to allow users to borrow assets while simultaneously accruing Eth2 rewards while still being staked as collateral.

To do so, stETH must first be wrapped to be applicable as collateral. This opens up an extra layer of efficiency and composability when it comes to the DeFi ecosystem in relation to rewards farming and borrowing. Some examples of lending protocols that may adopt stETH are: Aave, Maker, Compound, Cream, Alpha).

The addition of stETH as collateral in lending protocols allows for advanced composable rewards farming strategies. A user will be able to deposit stETH as collateral and take out an ETH loan to be further swapped back to stETH to add to their existing loan as a sort of leveraged position. Alternatively, ETH borrowed can be put to other purposes, such as: staking in Lido, depositing into other strategies, providing it as liquidity in a liquidity pool, etc.

Price fluctuations of the underlying collateral asset still play a large role in determining a user's health ratio and liquidation risk. Although, this theoretically allows users - who stake stETH as collateral while borrowing a position - to constantly improve their health ratio whilst constantly diminishing the possibilities of any unwanted liquidations.

Lending protocols may also allow for the borrowing of stETH in the form of a loan. This would allow users to take out a loan that is, in essence, constantly paying off itself. If there are many people that would like to borrow stETH, suppliers can also earn rewards on their stETH as well, earning the Eth2 rate simultaneously with the variable lending rate.

With the recent advent and hysteria of undercollateralized loans (credit delegation or protocol-to-protocol), lending protocols may support stETH loans to other protocols without needing to supply collateral beforehand. This is particularly efficient with the use of stETH, as the rebasing factor of stETH helps the borrower pay off their debt easier simply by holding it.

Proposals have been shared on the governance forums of certain lending protocols. Users have discussed the possibilities of adding stETH as collateral. You can read more information about it here:

Aggregators can use stETH in their rewards farming strategies as an additional rewards layer on top of their already existing rewards farming. Strategies are flexible and can maximize the highest rewards possible for their users. Popular examples of aggregators include: Yearn, Harvest, Badger.

An example of an existing strategy is the st. Ether-ETH pool, which uses the liquidity mining rewards earned from providing liquidity in the Curve stETH-ETH pool to automatically compound into stETH/ETH which is used to stake back into the pool.

With the addition of lending protocols adopting stETH as collateral, new strategies can be implemented utilizing the borrowed assets taken as a loan. Users can provide their stETH as collateral, borrow a position, then use those borrowed assets for a variety of rewards farming opportunities, such as providing liquidity into the Curve pool, providing liquidity into the Onsen pool, borrowing another position, and more.

The connections between various DeFi protocols in the ecosystem are extensive. Protocols can integrate and rely on one another which opens up endless possibilities for future innovations. With new integrations come new novelties, and with new novelties comes a new paradigm.

These potential future integrations will help strengthen Lido to become a powerhouse in Ethereum liquid staking.

If you are a protocol that would like to integrate with Lido, please contact our team here.