Solana V2 Update - What Does It Mean For Lido? 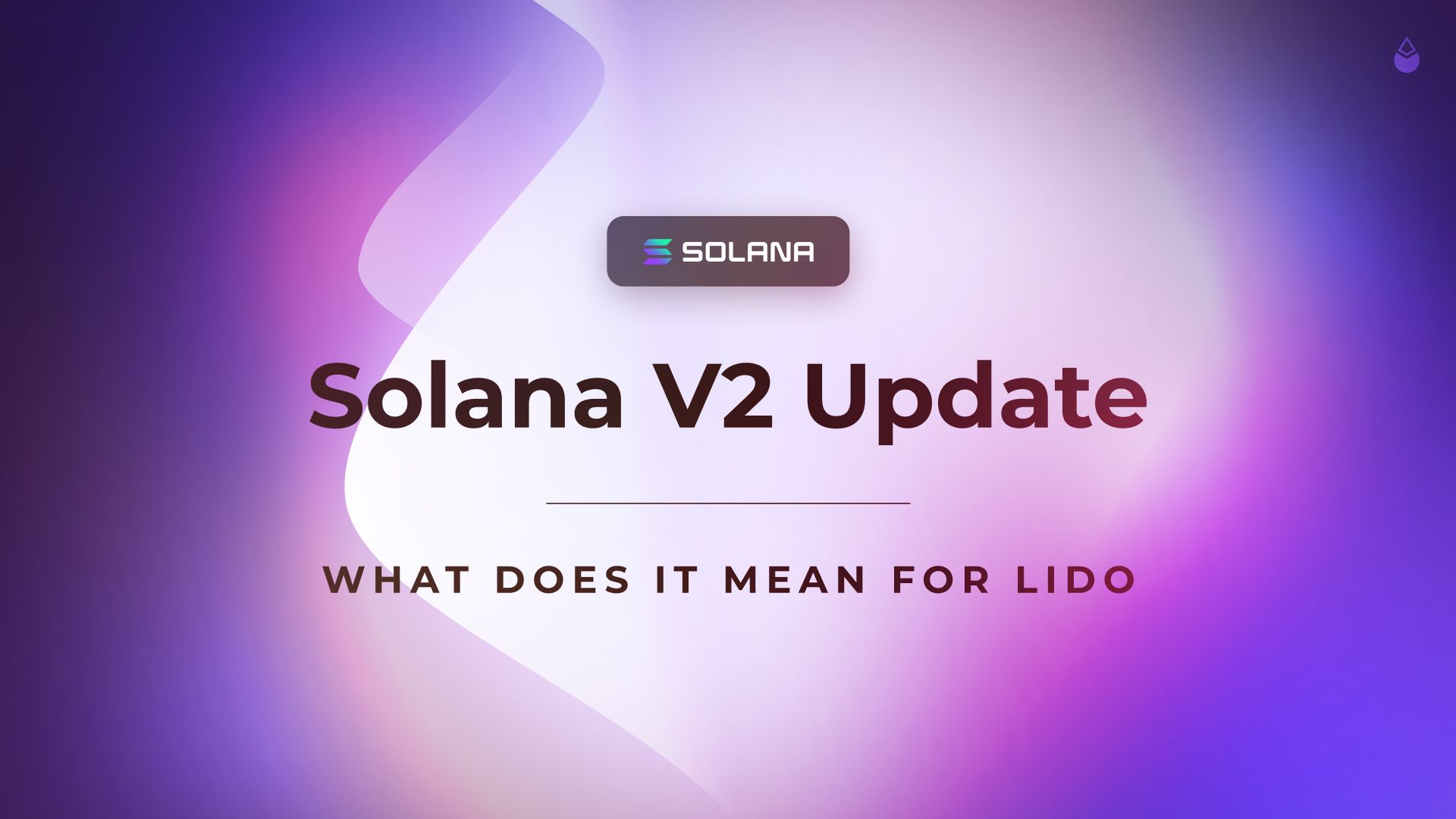 We are pleased to announce the successful upgrade of Lido on Solana to V2. The upgrade took place between the 6th till the 8th of December with no issues.

The first version of the Lido on Solana protocol was made by Chorus One (leading staking provider and Lido founding member) as part of the “Lido on X” initiative. Lido on X is the way for Lido, DAO-governed cross-chain liquid staking protocol, to bring liquid staking to the most promising blockchains.

In April 2022, protocol development transitioned to the P2P team (core members of the Lido DAO and the team responsible for liquid Ethereum staking on Lido). The P2P team formed a validator set vision and made a promise while developing Lido on Solana to put efforts into increasing Solana network decentralization & performance and growing Solana DeFi economics.

What has been accomplished in the past nine months?

And finally, in December 2022, after nine months of hard work, the Lido on Solana team released the 2nd version of the program.

What's In The Box

To understand the changes made, let’s have a look into how Lido on Solana works.

In contrast to its competitors, Lido on Solana works with a relatively small pool of trusted and highly performing validators. This approach has pros and cons to be discussed, but it can’t be ignored that Lido on Solana pool has been providing one of the highest APYs on the market since the start (6.11% APY on average for the last six months).

But the main issue validators had to deal with in the first version of the contract was the necessity to set up a separate 100% commission node for Lido on Solana only. On the other hand, this gave the contract complete control of the nodes making the whole process much safer.

The v2 update was mainly focused on improving the validators' economy but staying as safe and secure as possible.

These changes aimed to make the life of the node operators easier and more profitable, securing Lido on Solana stakers at the same time.

It is hard to imagine an operator increasing commission in order to ‘cheat’ with Lido on Solana's trusted pool. Still, If the validator increases its commission above 5%, it is immediately deactivated, and its stake is redistributed between other validators in the set. This protects stakers from the unscrupulous actions of validators, which increase fees at the end of an epoch to take away users' rewards.

How The Upgrade Was Done

It is well-known that Lido is managed by Lido DAO, so in order to make any change, the development team proposal should go through the governance process:

Only after that, the change can be performed.

The upgrade was not a simple task as it altered the very foundation of the contract. You can find out more about this process in the P2P validator blog post, but the important thing is how the Lido on Solana contract is managed.

Recently, Neodyme created an exciting thread about the upgrade authorities of the top 10 TVL projects. Every Lido on Solana protocol change is performed by a multisig - decentralized option for managing the upgrade authority, where several known entities have to sign the upgrade instruction.

There are seven members of the Lido multisig on Solana, requiring four approvals to effect any changes. You can look deeper into it here, but right now, they are ChainLayer, Chorus One, Figment, Mercurial, P2P, Saber, Staking Facilities.

Thank you to all of our stakers and constituent Node Operators in Lido on Solana for your assistance and flexibility through this process.

The Lido on Solana contract upgrade proved that the Lido on X initiative itself is a good way to provide liquid staking cross-chain. The Lido on Solana team showed excellent results in improving the protocol and growing the overall Solana Defi economy.

We remain committed to the Solana ecosystem and are excited to expand DeFi opportunities for the broader Solana community.