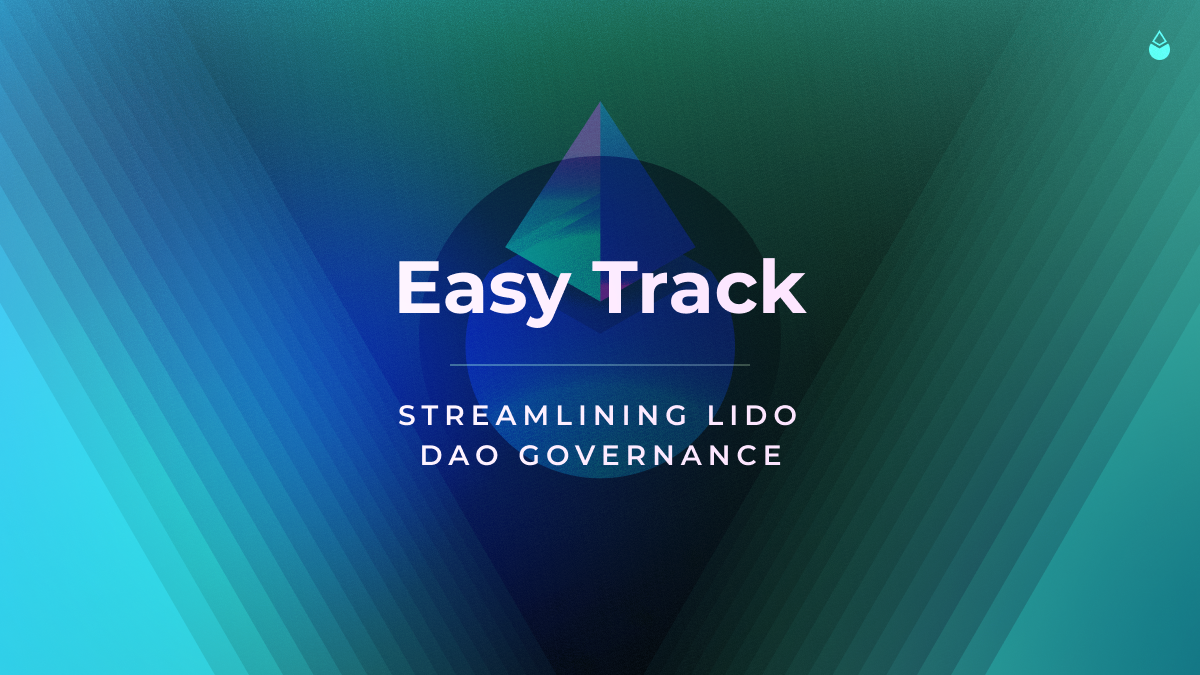 The Easy Track application has been developed as an efficient mechanism to assist with routine and uncontentious governance proposals for the Lido DAO.

Several shortcomings of alternative governance tools as they relate to every-day operations such as voter fatigue, high on-chain gas costs, and difficulties reaching quorum despite community consensus are all addressed with this new application. Importantly, security, flexibility, and scalability were all paramount concerns throughout the development of Easy Track, with extensive measures taken to ensure that safety has not been compromised for convenience.

Before addressing how Easy Track operates, it will be instructive to briefly highlight the factors motivating its construction and the drawbacks associated with the former Aragon governance mechanism. While the Aragon application is a powerful tool for DAO governance due to the fact that it is both transparent and reliable, it is ill-suited to manage routine operations that either have strong token-holder support and/or are only relevant to a subsection of the DAO (e.g. the financial operations team).

For Lido, in particular, governance proposals of this kind include allocating funds to reward programs, LEGO grants, and increases to the staking limits for node operators. In all cases, it is costly, both in terms of on-chain Ethereum gas costs and mental attention, for these proposals to be presented to the entire community of token-holders.

Moreover, it is not uncommon for these proposals to be rejected, not because token-holders oppose the decision, but because the necessary quorum of votes has not been attained. All of this contributes to voter fatigue and, more generally, it represents an inefficient use of time and resources for all involved.

Omnibus proposals, which bundle several small proposals together into one vote, have been adopted as an intermediate solution to this problem historically.

This work-around, however, does not directly address the core problems just highlighted, and it also introduces further complications if a specific component of the omnibus vote is challenged by token-holders while the rest remain supported.

The Easy Track governance application, however, addresses all of these problems directly by inverting the voting decisions for token-holders. Rather than requiring every minor governance proposal to receive an affirmative vote from a quorum of token-holders, Easy Track proposals, which are called “motions,” will pass automatically unless token-holders actively vote against them.

The objection threshold, which is the number of votes required to reject a motion, will always be set to a very low level. For now the voting level is 0.5% for any motion and subject to the possible of DAO based votes to change this figure. There is however, a hard cap at 5%.  This allows easy rejection by token-holders in the event of any motion disagreement. If a motion is rejected alerts will be broadcast to key stake-holders so as to facilitate a deeper discussion in the community. Furthermore, the voting window for each motion is set to 72 hours with the DAO able to decrease this to 48 hours  and there will never exist more than 12 active motions at once.

All of this will significantly reduce voter costs and fatigue because token-holders are only required to interact with Easy Track in the event that they oppose a motion.

Worth emphasising is the fact that Easy Track has been designed with both flexibility and scalability in mind. Initially, Easy Track motions will only be employed in a small number of settings and, as already mentioned, will be used exclusively in relation to those uncontentious and routine proposals that already have strong community support. With that being said, extensions of the application are possible if supported by the Lido community, with internal upgrades of the system already underway. Additionally, an intuitive and easy to use user interface has been developed to assist token-holders looking to navigate and interact with present and past motions.

Several security precautions have also been built into the system, with safety being a primary concern for all involved.

Firstly, the set of executable actions that Easy Track can undertake is strictly limited.

Thirdly, a fail-safe emergency brakes lever has been implemented that, when signed by the Easy Track developer multi-sig, will pause all motions until a traditional DAO vote has passed to reinstate the program.

Fourthly and finally, while many aspects of this new governance mechanism are quite sophisticated (e.g. the use of graph indexing to organize historical data in a very efficient manner), multiple security audits have been undertaken. Both MixBytes() and Sigma Prime have each independently audited the 16 smart contracts that undergird Easy Track. These audits, when paired with the extensive internal testing in the testnet environment and the rigorous use of the unique UI, can leave all involved very confident in the security and safety of Easy Track when moving forward.

With all of this in mind, Easy Track represents an efficient improvement to governance of the Lido DAO. The novel Easy Track motions will not only reduce voter fatigue and on-chain gas costs for token-holders, but will also facilitate the growth of the DAO by providing greater autonomy to the sub-committees and node operators within the organisation.

As demonstrated above, Easy Track has been developed with security and safety in mind while also remaining flexible and scalable in order to grow along with the Lido DAO. Thus, the internal functioning of DAO operations will be significantly improved following the implementation and adoption of Easy Track.