Modelling The Entry Queue Post-Merge: An Analysis of Impacts on Lido’s “Socialized Model” 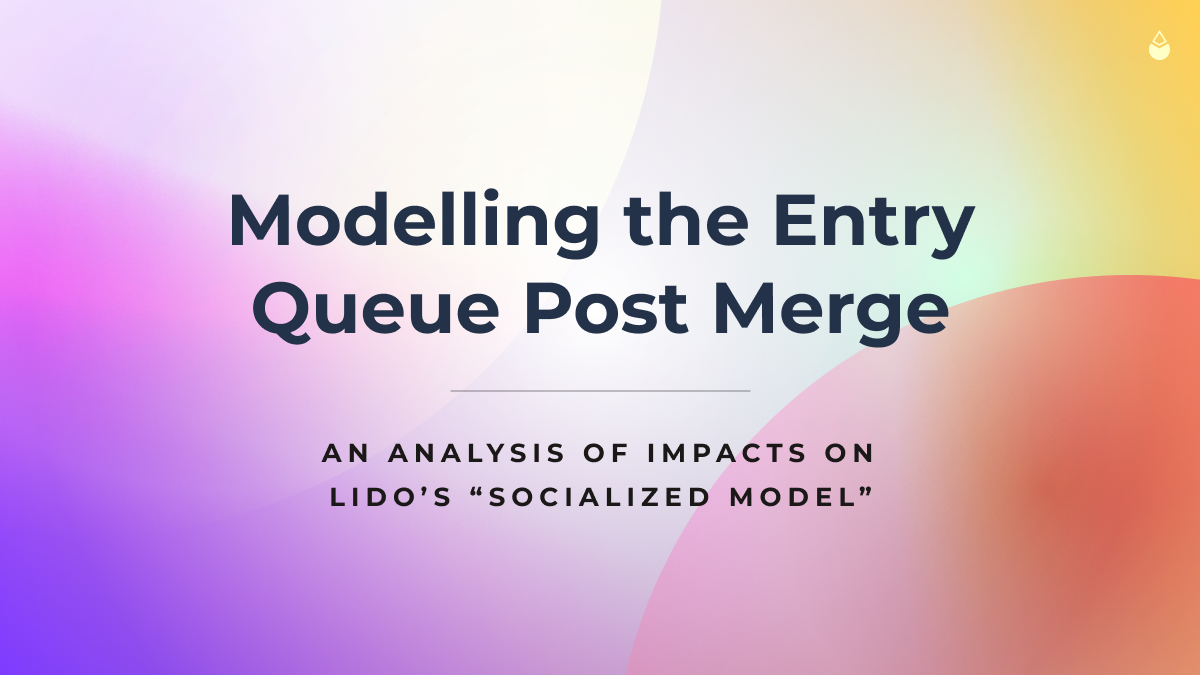 The Beacon Chain exists separately to the Ethereum Mainnet doling out rewards to the validators that correctly perform their duties. The Merge, the most anticipated event of 2022 in crypto world that will connect the Beacon Chain and the Ethereum Mainnet, is expected to bring a significant increase in staking APR causing an increasing amount of ETH2 deposits and, as a result, the entry queue.

Lido, being the leading Ethereum staking pool with more than 3M staked ether, uses a so-called “socialized model” for paying rewards to its users. It implies that rewards earned by Lido’s validators are being divided among existing and new users in proportion to amount staked although queueing validators do not earn any rewards until being activated.

Currently, Lido’s staking APR is about 4% and the Merge will raise it up to 8.5%. We conducted this research to figure out to what extent the decrease in staking APR due to the expected entry queue may affect our existing users.

Based on historical data and multiple simulations with the network's parameters, we developed standard (the most probable) and “harsh” (the most extreme) scenarios of the Beacon Chain growth.

Thus, we do not recommend changing the “socialized model” and if the “harsh” scenario came true, Lido would introduce the upper limit for the protocol growth aimed to protect the existing Lido’s users from the significant APR loss.

Merge, MEV, APR and all that jazz

Why should one expect an entry queue during the Merge period? There are at least two reasons for that.

The first one is about the expected increase in validators’ rewards.  At the moment, the Beacon Chain validators receive rewards only for their duties such as proposing and  attesting blocks. Currently, the staking APR on the Beacon Chain is about 4.4%. With every new validator, the APR decreases because the amount of rewards is inversely proportional to the number of active validators on the network.

The Merge, transforming the Ethereum proof-of-work chain to the proof-of-stake one, will add priority fees and MEV (Maximal Extractable Value) to the validators’ rewards causing an increasing demand for staking and, as a result, an increasing amount of deposits to the Beacon Chain.

How much can we expect the APR to rise?

MEV, in turn, being a total value that can be permissionlessly extracted from the re-ordering, inclusion or censoring of transactions within a block is expected to nearly double current staking APR.

Based on average moving 30-days' sum of daily priority fees (22.4k ETH per month) and the Flashbots data collected by MEV-Geth node, public mev-blocks API and Flashbots activity dashboards, at the current level of validators (323k) validator rewards will give an APR of 8.97% rather than a pre-Merge APR of 4.4%.

In order to prevent turbulent changes in key network parameters due to entry or exit of a significant number of validators at the same time, the Beacon Chain specs implies a limited number of deposits and new validators per epoch. To be precise, the current limits are set up as 5 validators and 16 deposits per epoch that allows the network to “metabolize” only 1125 new validators, or 36K ETH per day. When this number exceeds the epoch limit, we can observe (even before the Merge) an entry queue with zero rewards for queueing validators. In the future this limit is going to be higher, like 1 validator per each 65k active validators that will speed up the entry queue handling.

The alternative - “model with an entry queue” - implies that rewards earned by Lido’s validators are being divided among only existing users in proportion to amount staked and new users will receive the staking rewards after validators activation.

We need to find out whether the “socialized model” is still usable and effective for different Merge scenarios or it should be replaced by the other one and what are the conditions that can articulate this.

In order to forecast the Beacon chain parameters one has to model two different periods: from now to the Merge date and post-Merge period.

For the first one we used both autoregression and linear models, for the latter - scenario analysis. The other important assumptions are as follows:

We distinguish 2 types of staking APR: momentary and long-term. The difference between them is fundamental to understanding the real income or loss on the network.

In this case, we have to switch from “No of validators” to “Time” on the X axis and see how the long-term staking APR has been evolving over time.

Let us illustrate the concept with an example. We are used to operating with the momentary APR (green line) while not a single validator has ever earned 20% staking returns over a year. For instance, if you activated your validator at Genesis date (2020-12-01), your momentary APR was around 20% (percent points) and it was decreasing steadily, epoch by epoch, with every new validator activated. Thus, your long-term APR for a one-year period taken from 2020-12-01 to 2021-12-01 is about 8.4% (percent points) (blue line).

For the simulations, we used several parameters that constitute the network and Lido’s place in the market:

We identified and modelled three basic scenarios in order to define the maximum amount of rewards and APR loss for Lido’s existing users in case of the entry queue during the Merge period.

The most probable scenario - “Standard” - will not affect the users. According to the scenario, 3M ETH will be staked during 6 weeks around the Merge that leads to almost 0.07 percent points (1% compared to the model with an entry queue) of the APR loss for the Lido stakers in a one-year perspective.

So, let us look through the most extreme one - “Harsh”, that implies the arrival of 5M ether in 8 weeks. However, being compared to the current 10M ETH total deposited in 16 months, it seems very unlikely to get such an increase in ETH deposits.

We found out that this scenario would cause the decrease in the existing Lido’s users long-term APR of no more than  0.42 percent points (by 6.2% compared to the model with an entry queue). It means that even in the “harsh” scenario the maximum rewards deficiency for existing Lido’s users would not exceed 5 ETH per every 1k ETH staked with Lido.

Obviously, if the expected amount of arriving ETH increased, the queue period reduced, the network growth slowed down and Lido’s daily share were higher, the situation would worsen and cast doubt on adhering to the “socialized model”.

We also modelled a “like Genesis” scenario that does not bring any notable APR loss.

Combining all these parameters in multiple simulations, we found out that the most impactful one is the ETH amount. The amount of 5M+ ETH shifts the long-term APR loss to 0.5 percent points and further despite the changes in the other parameters.

The full analysis is available here.

An expectation of higher post merge staking APR together with simultaneously entering validators limitation will cause the entry queue to drastically increase. Lido’s “socialized model” works well for the most probable scenario and we do not see any reason to change it.

We admit that the adherence to the “socialized model” will decrease the long-term APR for Lido’s existing users in the short term, but this deficiency is small. Based on multiple simulations with such parameters as network growth rate, Lido’s share, amount of ETH in the entry queue and duration of the queue period, we found that although there was a short-term decrease in staking APR in the “socialized model” due to the expected entry queue, in a one-year perspective the APR loss would not exceed 0.07 percent point (0.97%) in the standard scenario. Even in the “harsh” scenario that seems quite unlikely, the APR would not go below 0.42 percent point (6.2%).

Moreover, we revealed that the only parameter that plays an important role in long-term staking APR loss is the amount of ETH arrived due to the market agitation. Regardless of the other parameters, only the arrival of more than 5M ETH to the network during the Merge period will decrease the Lido’s APR by 0.5 percent points (7.75%) in a one-year perspective only; that seems quite unlikely.

In case we underestimated the amount of ETH waiting to be staked, we can reconsider the option to put forward our recommendation to introduce a queued model for Lido deposits.

We would like to thank Vasiliy Shapovalov, Eugene Pshenichniy and Sam Kozin for their valuable comments and suggestions.