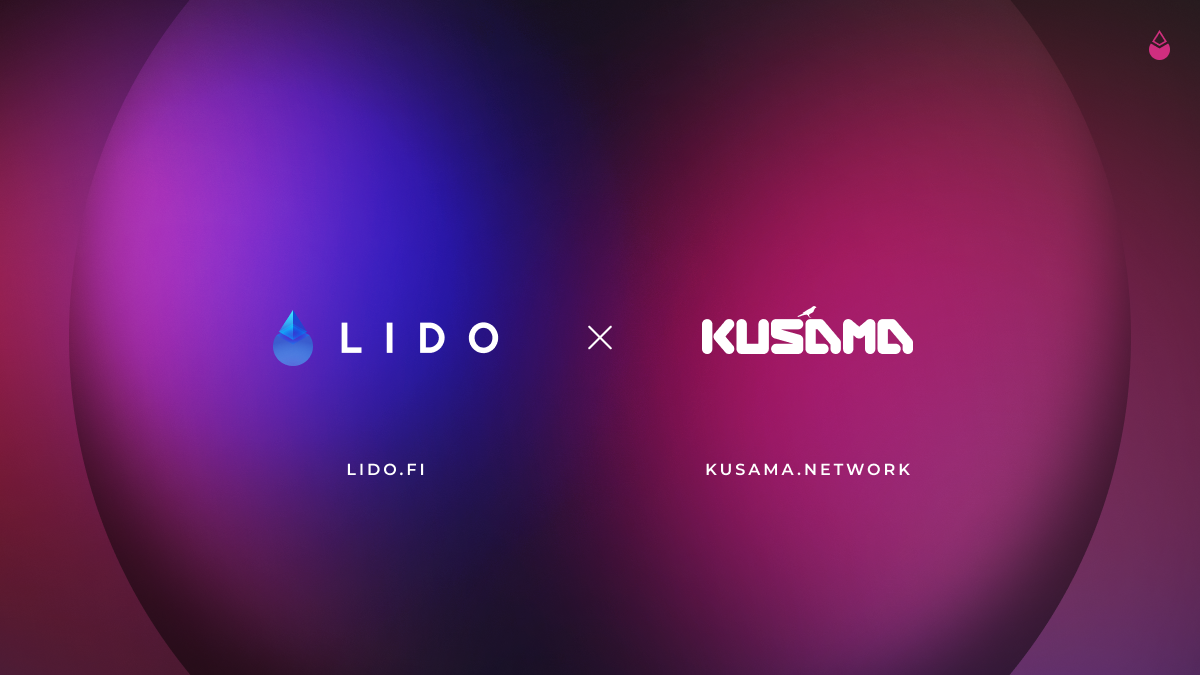 Starting today, users can stake their KSM with Lido to earn daily Kusama staking rewards and benefit from the many opportunities available across the Kusama DeFi ecosystem.

To get started, visit ​​kusama.lido.fi.

For more information, visit the Lido for Kusama (KSM) documentation.

Liquid staking on Kusama brings a number of new benefits to Kusama stakers.

For the first phase of stKSM (1-3 weeks from launch) there will be a stake cap of 10,000 KSM (approximately $1.6m), with reward oracles run by the MixBytes. During this phase we will see the launch of incentivised DeFi pools through which to deploy stKSM (e.g. as collateral for additional rewards), as well as to sell/unstake stKSM without the delay on unbonding periods.

During this phase, the Lido DAO will select 20 validator nodes based on optimal performance over the previous 83 Kusama eras (approximately 21 days). During this phase, staked KSM will be dynamically allocated to validator nodes based on a number of node KPIs including top APR to stakers net validator’s fees, slashing events, stable fee rates and nominations enabled by the node.

After a successful phase 1, the maximum stake will be uncapped, as will the number of active validator nodes. In addition to this, we will see the launch of decentralised reward oracles and the development of a dynamic model to maximise APR for Lido KSM stakers. We are aiming for the start of Phase 2 to take place approximately 3 weeks from today’s launch.

As the amount of stake managed through Lido grows and approaches the point where it may affect overall staking allocation in Kusama, we commit to working with the community and validators to protect the decentralization of the network and overall chain health.

The Lido for Kusama launch plan has been developed by the MixBytes() team as part of their LEGO initiative to expand the Lido staking ecosystem with Kusama and Polkadot staking.

The staking APR is calculated dynamically and fluctuates based on the node APY and the individual node fee. The formula is as follows:

The Lido fee is set at 10% of net staker rewards. The node APY and the node fee changes from node to node. There will be 10-10.000 active validator nodes in the system and the node fee may differ between each of these.

Comparing fees and rewards for regular staking versus Lido KSM staking, we ultimately see a higher net reward for users staking with Lido due to the dynamic reallocation towards the most profitable validator nodes.

See the calculation below for more information:

We are incredibly excited about this launch and the further expansion of the Lido liquid staking ecosystem. MixBytes() have been an incredible partner and the work they have achieved in collaboration with LEGO has been phenomenal to witness. We look forward to taking this many steps further in the coming months, first with the launch of phase 2 KSM staking, as well as the upcoming launch of liquid staking on Polkadot.

We look forward to becoming a larger part of the Kusama ecosystem and working with Kusama, KSM validators and the surrounding community to ensure the continued growth and decentralisation of the Kusama network.

For more information, come visit us in the Lido Discord or Telegram, or reach out to MixBytes().