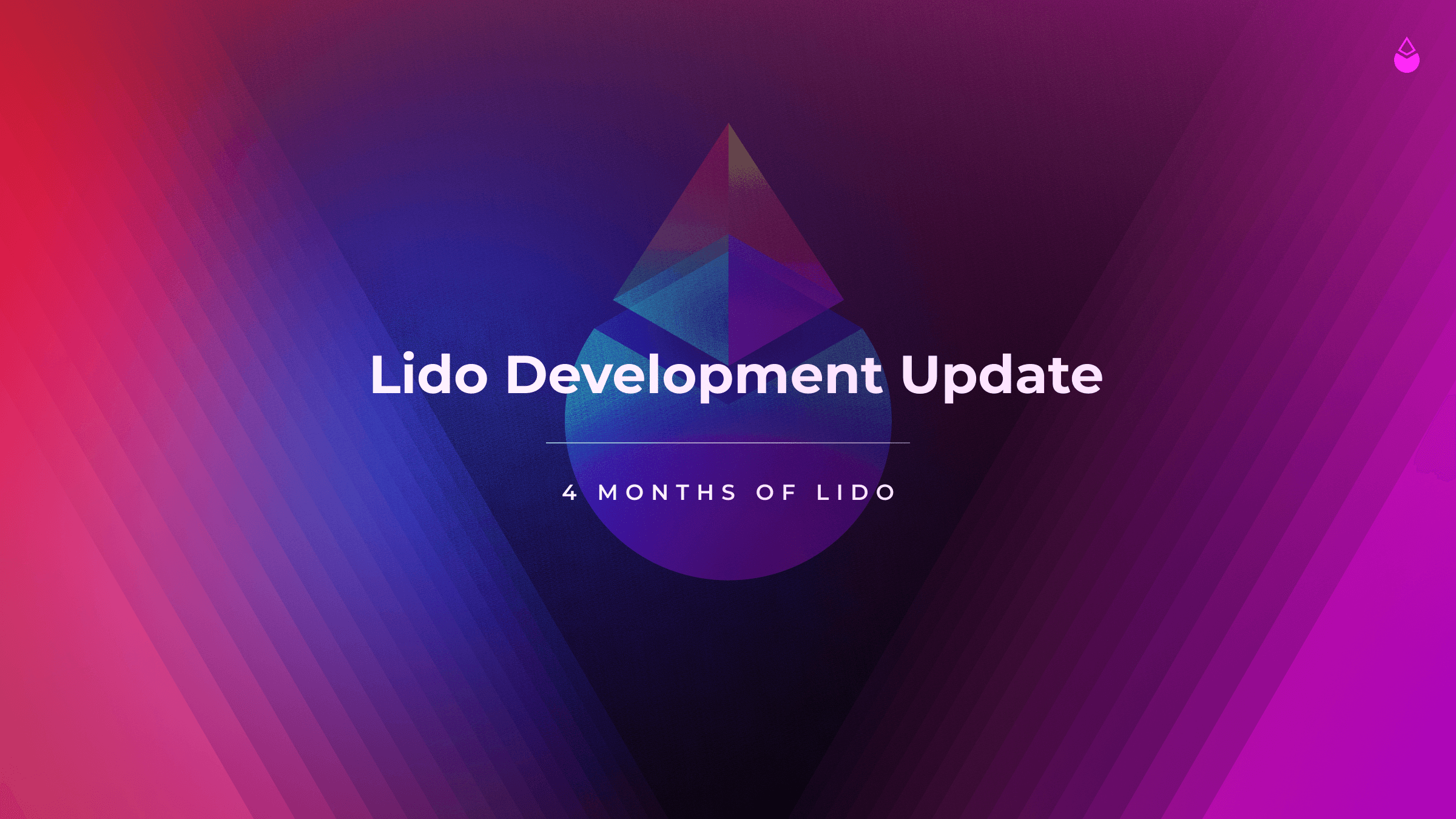 The last month was an incredible month for Lido as we’ve seen a substantial increase in terms of growth and adoption. There is now over $2B of staked funds across Ethereum and Terra by over five thousand users.

In this update we are excited to share some of the highlights from the past month of incredible growth and what’s to come going forward.

We are also thrilled by the fact that Lido continues to be used by a wide spectrum of users, the size of deposits range from a fraction of an ETH to thousands, or even tens of thousands. We recently saw 22,588 ETH being deposited to Lido in a single transaction, representing the largest deposit to date.

Since the last update we have seen:

Arguably the most important news regarding integrations this past month was the proposal for the development of a Lido-operated liquid staking protocol on Solana, published by the Chorus One team.

One of the most talked about news in the broader Ethereum and DeFi-space is the launch of the much anticipated Uniswap v3. A LEGO grant proposal of 7,000 LDO has been submitted for the development and deployment of an incentivized UNIv3 pool for the wstETH/ETH pair.

On the topic of AMMs, the Sushiswap team recently announced that the rewards allocated to the LDO/ETH-pair in the Onsen will be raised, incentivizing liquidity providers further in order to deepen the liquidity of Lido’s governance token. Check out our ‘Guide to SushiSwap Onsen’ to get started.

We are starting to see an increased demand for stETH from DAOs, funds and other large organisations. A proposal to invest a portion of the @NexusMutual capital pool into stETH has been submitted to the Nexus Governance Forum. The allocation to stETH would enable the protocol to further benefit their members by earning a yield on their capital. The proposal has received strong endorsement from their community since it was published.

A proposal from ParaFi Capital was published to Aave Governance to add support for stETH on their protocol. The vote on the proposal indicates support to add the token on Aave from the Aave governance community.

A proposal for the whitelisting of LDO, together with a co-investment of 750K BNT, has been submitted for discussion on the Bancor Governance Forum.

The Lido DAO continues to be active with multiple proposals and votes in the last month across a number of topics. Below we will highlight a couple of the more noteworthy activities that have taken place.

We started April off with the launch of Lido Grants - a system for supporting and funding developments in the Lido ecosystem. The grants process is designed in a straightforward way and anyone interested in building on the ecosystem is encouraged to apply. A total of 240,000 LDO was transferred to the grants program for the period between April 6th-June 6th after a vote in the Lido DAO.

With an increase in staked Ether with Lido, the slashing insurance from Unslashed Finance has been increased by a DAO vote. Lido is now covered for 5% slashing on more than 400,000 staked ETH until June 22nd. The slashing insurance significantly mitigating one of the primary risks associated with Ethereum staking.

The Lido DAO voted for a continuation of the Curve staking rewards with LDO tokens, distributing 4,800,000 LDO to the stETH LPs on Curve over a 30 day period. This is the fourth time the proposal has been extended, this time with a slight decrease in rewards as other DeFi protocols beside Curve are being explored for similar rewards programs.

The treasury diversification program intended to solidify Lido’s position as the leading liquid staking solution and allowing us to grow further through collaboration was a success. We are excited to diversify 10% of the Lido DAO treasury and welcome over 30 participants to the Lido DAO.

We’re excited to be a part of the @open_defi hackathon with two specified bounties for  participants. We are also funding an open-ended challenge on anything related to DeFi, liquid staking and Lido with a total prize pool of 10,000 LDO. If you have any questions, don’t hesitate to reach out.

A post from Paradigm by researchers Hasu and Georgios Konstantopoulos dove into the field of staking pools and staking derivatives with the thesis that “staking derivatives like stETH could replace ETH entirely while boosting the security of Ethereum as a whole.”

We are excited to soon be launching an easy way to track the staking returns and staking history with the release of our reward dashboard.

Specifics that we are looking forward to include an integration push to see a growth in the role and usability of staked ETH across the DeFi space. In line with this we are making a concerted effort to scale our LEGO framework, through e.g. continued hackathon involvement, to enhance the external development contributions surrounding Lido.

We look forward to another month of Lido!