May 26, 2021 in Ethereum, General by Vasiliy Shapovalov 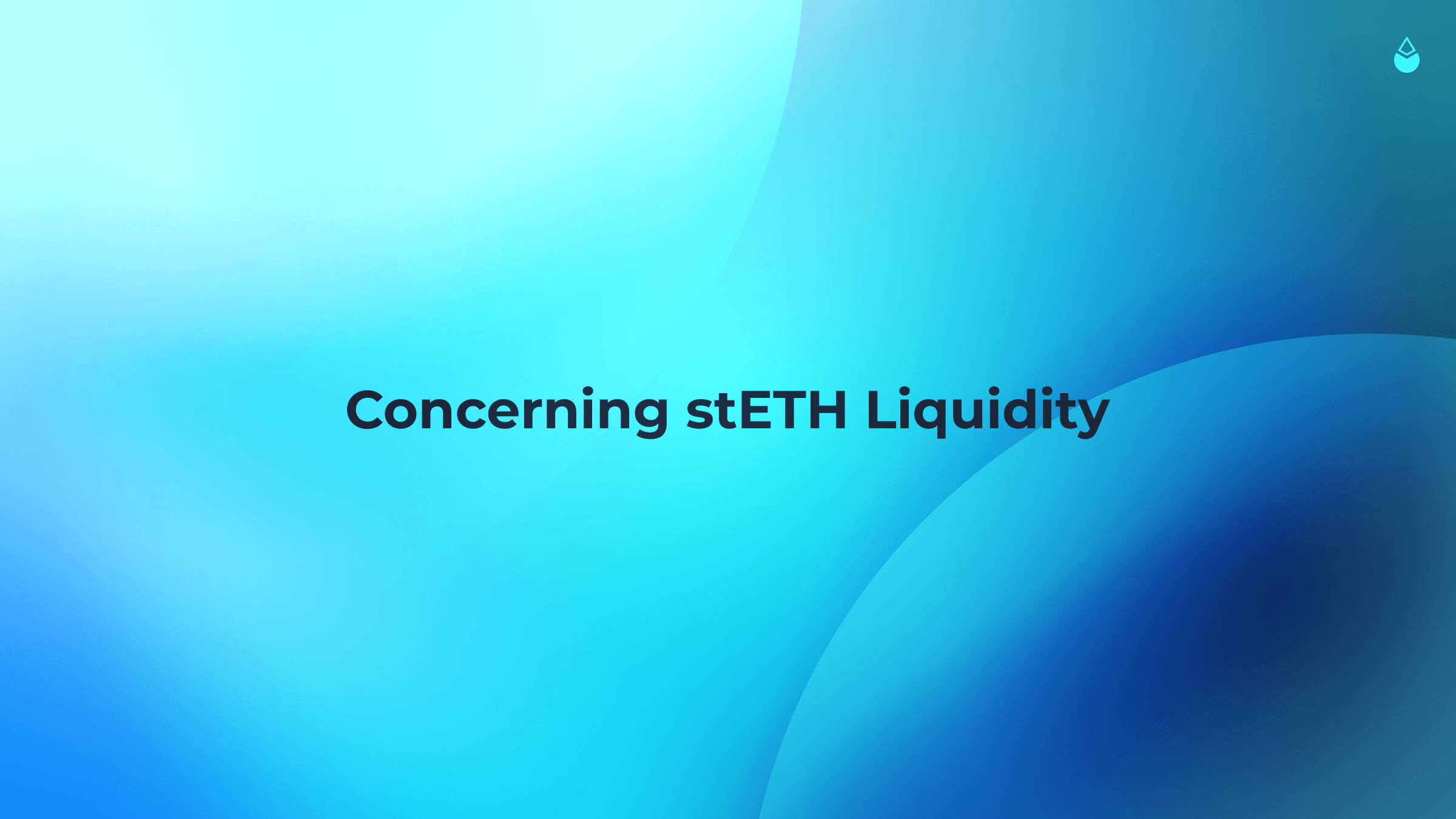 Financial protocols need stETH to be liquid to be accepted as quality collateral. When beacon chain withdrawals are enabled, stETH's liquidity is ensured by the fact it's possible to unstake and withdraw it with a slight delay. Right now it's not the case, but stETH is very liquid because the liquidity is incentivized. The incentives will keep on being provided at least until the Merge and withdrawals are enabled, which is expected to happen in less than a year.  Even without incentives, there's some credible desire to a) MM with stETH b) do a time-based arbitrage for stETH. It's very hard to predict what that desire would be organically (incentives add a lot of noise to the market data) but different ad-hoc mental models for the market all converge on significant support at a 5-25% discount.

How liquid is stETH?

To be good collateral (e.g. for Maker or AAVE), an asset needs to be liquid. When beacon chain withdrawals are enabled and stETH is in its final form, its liquidity is ensured by the fact that a user can unstake stETH and get ETH in return.

It's not a fast process - from 27 hours to months depending on how crowded is beacon chain exit queue. But it enables a time-based arbitrage strategy, where an arbitrager buys stETH with ETH cheaper than 1 to 1 and withdraws ETH with rewards to themselves. That will ensure significant demand for stETH when it's discounted, and the larger the discount - the larger the demand. In that setting stETH is almost as liquid as ETH itself; potentially it can be even more liquid.

Beacon chain withdrawals are not enabled now and will not be enabled for quite some time, though: Q1 2022 is the earliest realistic option. Until that happens, stETH is a more risky asset. Time-based arbitrage is still possible, but not over a period of days - it'll be a yet unknown number of months until withdrawals are enabled. There's not a lot of trading activity going on with stETH so far, so trading fees are pretty small. Market making on stETH (including providing liquidity on Curve) at this point is somewhat risky and not all that rewarding.

Still, the stETH:ETH pair is the biggest pool on Curve with over $1.5b in liquidity, which makes stETH one of the most liquid tokens in crypto. You need to trade 175000 ETH to stETH or vice versa (more than $200m) to move the price 2%. The reason for that is that the pool is incentivized. There are CRV rewards and LDO rewards that people who are providing liquidity for a stETH:ETH pool can receive by staking their LP shares in the Curve gauge. Lido is incentivizing the pool by monthly governance decisions: e.g. this month 0.375% of total LDO supply, which amounts to $9m or over 3500 ETH at the time of writing, was allocated to the gauge.

Lido has been gradually reducing the allocation to incentivize the Curve pool in LDO terms (from 5m LDO for the first 3 months to 4800k to 3750k on the last one) but it is committed to incentivizing the pool for at least 8 more months, and for a good reason that will stay valid until the withdrawals are enabled. Lido's got a lot of undistributed LDO in its treasury and it stands to reason the rewards on stETH:ETH liquidity will continue for quite some time. stETH's liquidity is arguably the most important feature of that liquid staking token. That pool is also incentivized by the CRV token, which is allocated weekly to gauge according to Curve governance. That part of rewards is historically secondary to LDO rewards.

There is a negative correlation between a farm's risk and a farm's APR. The incentivized pool (as perceived by the market, at least), the more crowded it gets until APR gets at parity with other options of similar risk. Current ETH:stETH pool APR is around 11 to 13%. Historically the rewards were much higher compared to the pool size (around 40% APR territory for quite some time) but with overall DeFI rewards going lower with time and growing confidence in Lido as the liquid staking solution.

Even without incentives (which Lido is committed to continuing for a long time), there's some credible desire to a) MM with stETH b) do a time-based arbitrage for stETH. There's no hard data on what that desire would be organically (incentives add a lot of noise to what can be seen in a wild) but there are some reasonable models to gauge what that demand and that support could be.

Monetsupply made an article on stETH as a treasury building block. The model boils down to comparing stETH to a bond with an uncertain maturity rate and pricing it like a bond.

Let’s give an example:

In these circumstances, we’d expect the fair market value of stETH to settle around 1.8% below face value (roughly 1.08 divided by 1.1). Any widening in the interest rate spread between stETH and ETH in defi will lead to an increasing price discount. This also applies to changes in users’ perception of risk, which is expressed via higher expected rewards.

Unlike most other bonds, stETH has an uncertain future redemption date — this depends on when the ETH2 upgrade is ready. Taking the same example above, but assuming an additional 6 month delay to the merge, we can see that longer duration also leads to a larger price discount.

stETH risk is difficult to evaluate, but it's presumably lower than many productive ETH kinds of product.

stETH has traded very close to par value for its entire history. This makes sense when we look at the factors above — generally, stETH earns a much higher rewards than comparably risky ETH investments, which has led to consistent inflows that close any price discounts. And while stETH is sensitive to shifting duration, this means that the potential for price discounts should drop steadily as the expected merge date draws closer.

Monetsupply doesn't give an estimate of what's the fair risk/reward assessment but says it's less risky than the reward implies. From there follows that the similarly thinking market participant would have an incentive to buy stETH at 100-X% where X is in single digits.

In a Twitter thread on the same topic there is a different estimate:

In a personal conversation monetsupply confirmed that the difference comes from the former number being a "fair-weather" one, and the latter is an "all hells break loose" estimation - when it's down to liquidations, and the market's in turmoil, and ETH is congested, and all liquidity in AMMs had been dried up, that's where the stETH discount looks juicy enough to participate anyway.

At the moment market participants (including sophisticated, professional players) are farming stETH:ETH Curve pool with $1.7B to get about ~10% APR in exchange. That implies that 10% APR on ETH is an acceptable reward ratio for them given the stETH risk + Curve risk.

If we expect the merge and withdrawals to happen within a year, another way to get this 10% APR on ETH with a similar level of risk would be to buy stETH with a discount of (10% - expected staking APR). Expected staking APR is hard to gauge, but it should be within the 3-7% range. Current farming sentiment implies there would be a price floor around 0.93-0.97 ETH/stETH, below which $1.5B of liquidity considers buying stETH a good trade. And that price floor only goes up with ETH2 merge development going forward.

Market sentiment, of course, is a fickle thing: what can change is:

I think 3 will only go down with time, at least long term: DeFi APRs are slowly going down since last summer, as DeFi matures and there are fewer opportunities and more experienced participants in the market. Short-term fluctuations, as we had in March with sETH:ETH Curve pool briefly having 50% APR, and Vesper's lucrative liquidity mining program, are still possible.

To account for 1 and 2, it'd be prudent to have some margin on what is an enticing discount on stETH to attract buyers.

What we can learn from the past

When the question is "how will Lido liquidity fare if there are no incentives", there's not a lot to speculate upon in the past, given Lido always had a lucrative liquidity mining program, and other ETH2 liquid staking tokens are just not that big to extrapolate freely.

I'll provide a few graphs and factoids, and make my own conclusions from them. I'm not adamant about these conclusions, because the incentives make the input data noisy.

First graph combines stETH price, the amount of staked ETH in Lido, and an "adjusted" amount that takes into account an imbalance in stETH:ETH pool on Curve (essentially considering stETH removal from the pool as a kind of "unstaking").

Here you can see:

AnkrETH is the second-largest liquid staking token for ETH with a 7.5% market share (compared to Lido's 67%). Its liquidity is slightly incentivized for the most part of its lifecycle, with an exception of 20-ish January to 20-ish February when it was incentivized very heavily. Current incentives are around 8% APR. You can see that the absolute discount it had was at its worst less than 20%, and in recent months it's holding steadily between 0.89 and 0.985.

What I can gather from this data is that:

Will this reasoning hold in the future?

Absolutely not. There will be a major shift in stETH possible usage, available instruments, and the market demographics.

So far most of the stETH holders are sophisticated whale farmers and protocols. Where we're headed stETH will be used by traders as a unit of account, DAO treasuries, hedge funds, retail - which will change the market demographics a lot.

More complex instruments on top of stETH - lending, leveraged trading, leveraged staking, options and futures, both DeFi and CeFi kind, will allow for much more sophisticated strategies. What's almost certain is that more integrations for stETH mean more organic trading activity for it, consequently - more organic liquidity. How that would impact price stability, though, is an open question.

The overall conclusion is that Lido is committed to incentivizing the liquidity for a long time; but in the imaginary timeline it doesn't, there still is a good amount of liquidity on discounted levels of stETH:ETH pair.

To integrate stETH in your protocol, check out docs.lido.fi and the Lido Ecosystem Grants Organization.