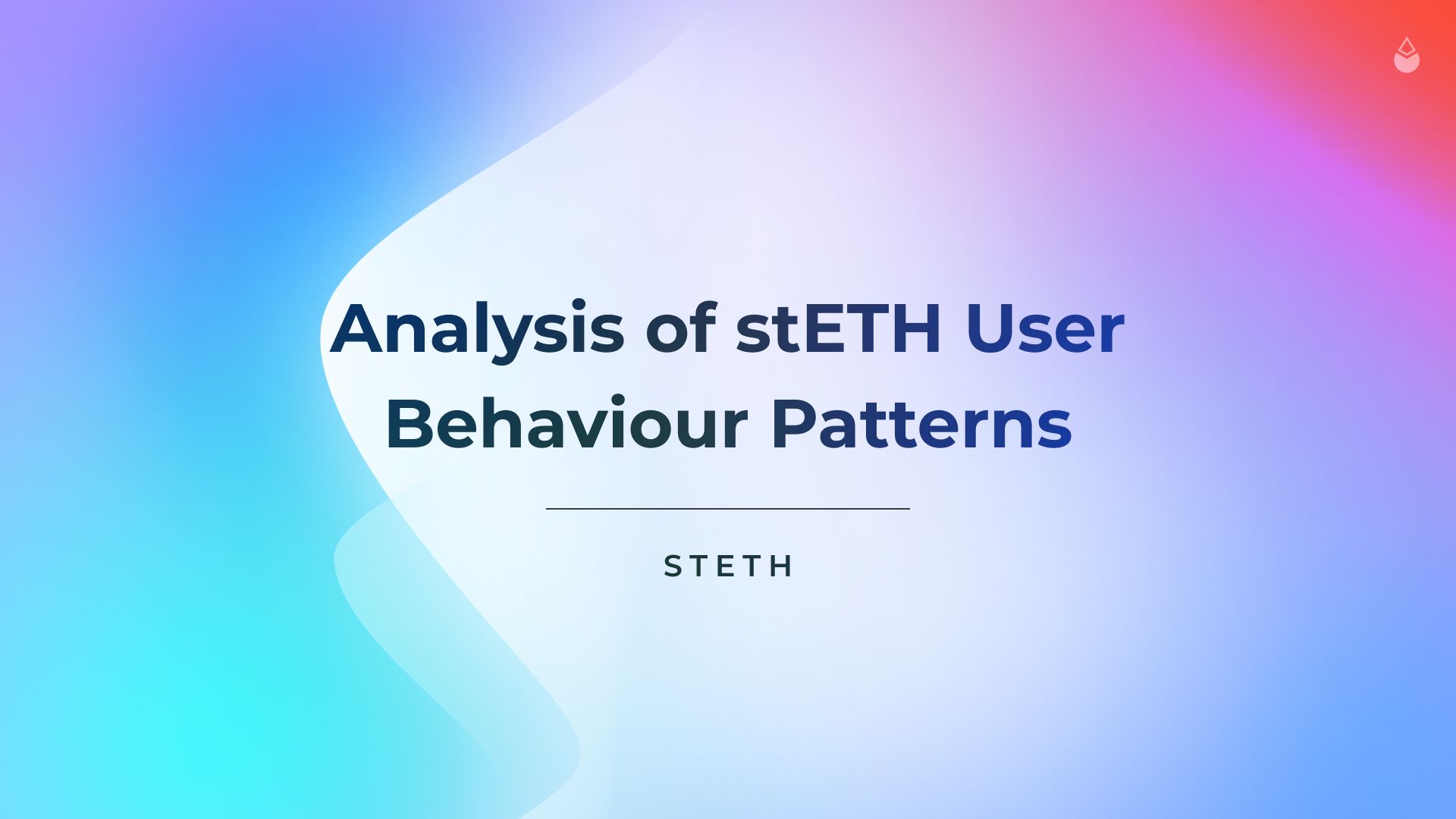 In an effort to better understand Lido users’ behaviour, below is a cohort analysis of various wallet sizes.  We have come up with a classification system for wallets of different sizes, from Whales (>=10k stETH) all the way down to Plankton (<1 stETH).

In short, the major behaviour patterns of Lido users can be described as direct staking and passive holding, but if we dive deeper it’s not so simple.

For many small wallets direct staking is the only source they choose (83% of them are direct stakers). At the same time big wallets tend to diversify stETH sources: 54% of big wallets use direct staking, but they are also buying on DEX (49%) and receiving stETH from EOA and CEX (38%).

Passive holding is the most popular strategy among stETH users, aside from Whales. On average it was chosen by about 71% of Lido users, but by only 43% of Whales. Big wallets are more active on the secondary market than the small ones e.g., more than 25% of big wallets use liquidity mining, more than 16% use stETH as collateral, including leverage staking.

As for Lido users' loyalty (talking about wallets with >=1 stETH on the balance), an average period of stETH holding is about 225 days for now. Currently more than 82% of wallets have been with stETH on balance for more than 3 months, and more than 58% - for more than half a year.

Retention analysis reveals that 23% wallets that joined in December 2020 have been staying with Lido from the very beginning until now.

Current retention rate of 55% shows that over a half of the wallets that have ever interacted with stETH are still holding stETH/ its derivatives on their balance.  We intend to track these retention and loyalty metrics over time.

Do you know that Lido is a leading liquid staking protocol on Ethereum? Sure, you do. But who are the folks that stake with Lido?  What strategies do they use?  And how loyal are they to Lido? If you want to know, listen to our story.

To understand better our stETH users we split them into several categories (from Whales to Plankton) and then started to explore their behaviour and answer the questions:

You may ask - Why do we yearn to answer these questions? -  and moreover - Why do we share this information with you? - It’s not a secret, because

Our final data sample includes 90,996 unique stETH addresses. All the data was retrieved from Dune.com. The charts are built on Dune or based on the data taken from Dune.

For more actual information use our dune dashboard

Let’s start our story from the very beginning - from our first question: Who are the Lido users?

To answer this question we extracted all addresses (91,145 in total) that have ever received stETH and/or wstETH for the analysed period (December 18, 2020 - August 16, 2022). Then we excluded the complex smart contracts (149 addresses). Our final sample counts for 90,996 addresses including simple wallets (EOA) and some contracts including Gnosis Safe, Instadapp accounts and Argent wallets. To keep it simple we call these addresses “wallets”.

Our acquaintance with Lido users began just like a normal one -  from getting to know the names: we distinguished 7 categories of stETH wallets - from Whales to Plankton.

Just to compare: Whales, Orcas and Dolphins together represent only 1.13% of addresses, together with Fish they get 5.25%. The rest of Lido users (94.75%) had less than 100 stETH inflow in the analysed period.

Getting stETH: How did they get it?

There are 3 main sources of stETH exploited by Lido users:

- staking
- buying on DEX
- receiving from EOA and CEX

We compared sources of stETH used by bigger wallets with >=100 stETH and those with <100 stETH inflow.

Sources of stETH used by wallets

Big wallets (from Whale to Fish) are more eager to use different sources of stETH than small ones:

Some of them get stETH from all three sources. In other words, big wallets tend to diversify stETH sources.

In contrast, small wallets (from Shrimp to Plankton) prefer direct staking to the other sources:  83% of them are direct stakers.

The next step was to identify wallets strategies that they apply while managing their stETH. We identified 6 strategies, namely:

Please note that a wallet may use different strategies in case it’s not a passive holder.

The table shows the popularity of stETH wallet strategies depending on the wallet size.

In general, big wallets are more active on the market and tend to implement a wider range of strategies than the small ones:

Anchor column shows that 6.4% of stETH users might have been affected by the Terra collapse.

Passive holding strategy is the most popular one and adopted by more than 71% of Shrimp, 81% of Krill and 65% of Plankton wallets. But only 43% of Whales prefer passive holding.

04 Focus on: loyalty of stETH users

To find out how loyal are stETH users to Lido, we analysed all wallets with a balance >= 1 stETH at the moment of research (August 16, 2022) (including all the stETH derivative forms). Plankton wallets (<1 stETH) are excluded from loyalty analysis to not mix up wallets by size (by inflow) and wallets by their current balance.

To analyse the loyalty of the current stETH users we calculated the number of days they stayed with Lido:

The pie chart shows how long stETH wallets have been holding stETH:

- 82.1% wallets (blue, green and yellow sectors) have been with stETH on the balance for more than 3 months

Average periods of holding stETH on the wallet balance, days

The bar chart  shows how long the current stETH users have been staying with Lido.

The average Whale has stayed with Lido less than other wallets - 210 days at the moment of research presumably due to 2 factors:

Wallets of all categories have been with Lido in a range of 210 to 240 days that reveals similarity in stETH user behaviour patterns. On average the stETH user has stayed with Lido for about 225 days.

To understand better the life cycle of stETH wallets we used retention analysis technique that was adapted to the blockchain:

Retention rate reveals the percentage of retained stETH users during the analysed period. It was calculated for each month cohort and for the whole period of research.

Current retention rate is about 55% for the selection of 46,201 stETH wallets.

Just to compare: 1-month retention rate for crypto apps is hardly over 20%.

An eight-week retention rate for the finance industry is considered high if it's over 25%.

Retention rates are marked by colour:

Course for further diversification. Diversification and the big share of small wallets (almost 95%) bring a balance to the Lido ecosystem. We desire to be attractive to wallets of all sizes and will adhere to this philosophy in the future.

Course for active stETH users. Among all strategies used by stETH holders, passive holding is less profitable, but still the most popular one (used by 71% of stETH wallets). Lido is yearning for more active stETH holders that receive higher APY using stETH widely on the DeFi market. So we intend to make active strategies e.g., liquidity mining or using stETH as collateral, more attractive/profitable and easy to use.

Longing for your loyalty. Lido aims to increase the loyalty of stETH holders because it brings more sustainability to the Lido ecosystem and higher rewards for its users. Current stETH users stay with Lido for more than 7 months and we want them to stay more. Lido loyalty gravitates to stETH users who actively manage their stAssets in the long run.

Not By Ether Alone. And finally we should add that this research is focused on Ethereum users only, but we plan to expand it to all chains of Lido presence including Solana, Polygon, Kusama and Polkadot and Layer 2 solutions.